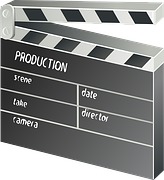 Here I will review the movies and, hopefully, introduce you to some absolute classics as well as reflecting on new releases. I will write about the big films from Hollywood and, probably more frequently, the indie movies from the world’s aspiring new talent.

My background is BBC drama and I love the movies. When I was a young child I grew up on a diet of westerns. My grandmother loved westerns and we would sit and watch them together. The westerns were clean-cut – there were the good guys and the bad guys. And then there were the westerns that depicted native Americans as savages. What an influence that must have been on the boy I was then. Thankfully, as well as movies, I loved books and I remember reading Edgar Rice Burroughs Tarzan Of The Apes and I remember distinctly how that changed my

perspective. After reading Tarzan I watched those westerns where the native Americans were the bad guys and remember getting angry because I now saw natives in general as having a more harmonious relationship with mother Earth than the white men, of whom I was one. So films and books changed the way I perceived myself and the lesson I learned from that is all mediums of fiction are powerful tools that shape personality and ego and can better hone our perception of reality.

And as I grew up I noticed a new generation of writers and films makers had learned the same lesson as myself as new westerns offered a better understanding of native Americans with Dances With Wolves being a typical example. There were earlier movies that depicted native Americans sympathetically, such as Broken Arrow, made in 1950 and starring James Stewart, but such films were exceptions to the general rule where the audience was fed negative images of native Americans.

But I didn’t only watch westerns. When I was a boy there was a huge film industry here in the UK with Ealing comedies, epic historical dramas, second world war films and, of course, Alfred Hitchcock was a film industry all of his own. And, of course, most of the films were still in black and white. But in reflection, I’m not sure any one particular film addicted me to the medium. Rather it was the magic of every movie I watched that caused me to seek a career in film making. However, my particular specialisation, which is writing the material in the first place, has, I feel left me less than appreciated.