Hi, I’m Tim Rees. My background is BBC drama and before that the military. You can read about my life in the army in my memoir, In Sights: The Story Of A Welsh Guardsman, published by The History Press.

During my time with the BBC I made many films and dramas, including one about a period of my life titled, Mimosa Boys, which was broadcast on BBC1 as a Play For Today. It was a wonderful period where I worked with BAFTA and Emmy award winning directors. I left the BBC to focus on writing my own scripts and ended up writing the novel first so my story is set firmly on the page – my experience with the BBC taught me scripts are rewritten and change from the original script due to budgets, director’s idea’s and perspectives and then the actors come in with their own ideas on the character they’re playing. Making a film is an intensely creative process and it is a process I love, but after finishing my first novel, which is Raw Nerve, I knew I’d been born to be a novelist first and foremost, mainly because the creative intensity is doubled and my relationship with the characters is so much more real than working on a script where it’s necessary to leave it to the director and actors to flesh-out character.

After I’d finished Raw Nerve, I sent it to an agent who immediately signed me.  Very soon after that I was flying to New York to sign a deal with HarperCollins. Whilst in New York an actor friend had just won a Tony Award on Broadway, so we hooked up and in his dressing room I met a film producer who asked what my novel was about? I thought for a second how best to explain the story, “It’s a fictitious scenario about why Colin Powell didn’t run for the White House,” I said casually. The producer’s knees buckled. “I have to read it,” she gushed, so we arranged to meet up the next day with my agent. As you can imagine, this was very exciting times. Everyone who read the book loved it. So why didn’t it get published or made into a film, you may well ask? Well, although all the junior editors in the major publishing houses wanted to publish, on every occasion the plug was pulled by the President or Vice-President of the company because it was considered too controversial. One VP actually stated they couldn’t be associated with riots in the streets and another said I was stretching credulity to breaking point and beyond – I think they were referring to the fact I was suggesting a black woman could be elected to the White House. It’s laughable now since Barack Obama has been elected twice. 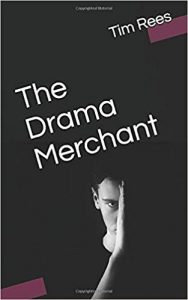 And in February 2020 Wales Press published my novel The Drama Merchant, a contemporary love story about a soldier who falls for a pacifist. On reader stated: “I haven’t enjoyed a controversial book like this since I read Machiavelli’s The Prince!” I don’t think reviews get any better than that. Another reviewer recommended that women should get their partners to read the novel.

You can discover more about The Drama Merchant at http://www.walespress.com

The Drama Merchant is also available as an audiobook. It is FREE with a Audible trail.

Very shortly after Wales Press published The Drama Merchant, they published A Seed Once Sown.

A Seed Once Sown is a novel with a big heart. At the core the storyline is focused on animal rights, whilst also offering us an intimate portrait of William, a murderer.

One pre-launch reader wrote: “This is one novel I didn’t want to end. Trophy hunting is a subject I feel strongly about and it was as if the characters were talking directly to me. Animal rights is a huge and controversial topic, but Tim Rees is fearless in grasping that nettle. And William is a murderer, but I like him so much and his relationship with fifteen-year-old Ashley is emotionally engaging. Now I’ve finished the book, I’m missing that involvement. What’s troubling, though, is the fact we are talking about murder here. The police detective in pursuit of William is a wonderfully strong female character, but I wanted her to fail! Right up to the very last page Tim shone a new light on animal rights for me. I’ve learned a lot and even feel inspired to get actively involved in animal rights issues.“

The audiobooks for both novels have been recorded and await quality assessment before release.

Delphian has now been published. Take a peek?

You can read more about my novels at http://walespress.com